And a bit of scenery work this afternoon as well.

First, a stream:
Then some additional "slither" on the hill next to the sawmill site: 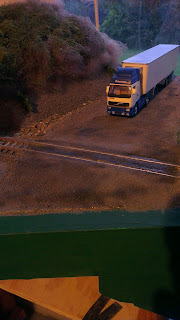 I've since glued the slither down further so it doesn't look too bushy.
Posted by Lewis Holden at 8:44 PM No comments:

Email ThisBlogThis!Share to TwitterShare to FacebookShare to Pinterest
Labels: Scenes

Carrying on with my obsession with Roman numerals, I've finally got back to the ZM wagon mentioned a few months ago. Basically John Harris pointed out that the struts on Peter's original model were wrong, so I've modified them myself (Peter's subsequently updated the wagon). The wagon's also had a quick primer, as you can see this has made the worst of the powdery plastic disappear.

Next I'll add the handrails and it'll be off to the paint booth with my ZBP wagon and a Cross Creek ZP I've assembled.

The final scheme for the ZM will be Cato blue, ala this wagon on a recent shunt to Tamaki (I've been between jobs recently so popped down to the local sidings to snap this shunt, which usually runs about the middle of the day): 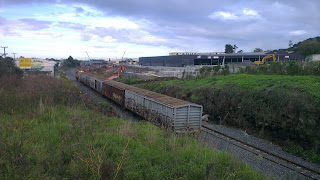 Not sure if I'll grafitti my wagon like this one...
Posted by Lewis Holden at 7:28 PM No comments:

So, I ordered one of Pete's ZH wagons today off Shapeways, along with the NZ120 version of my ZBP parts. Hopefully they'll print all ok this time.

I've wanted a ZH for some time but other projects have got in the way - so I was very keen to see how one of Peter's prints will come out. The next issue is what decals to use - since I'm modeling the 1990-1995 era of New Zealand Rail Ltd, I was keen to make decals along the lines of the design used for the AusRail '95 ZH wagon, published in the October 2000 edition of the Journal. However, the design itself was in black and white - so after posting a question on the New Zealand Locomotives Facebook group, many pics were forthcoming. Stacy Chandler came up with this gem:

...I've come up with these decals:

Feel free to copy them for your own models (or scale them down for NZ120 versions).
Posted by Lewis Holden at 10:06 PM No comments:

I've finally got the roof and sides on the ZBP. I would've added the channel which the curtain side attaches to, but it turns out I don't have any small enough... next stop, the hobby shop.

In other news I managed to screw up Daryl's curtain sides which he gave me, although I wasn't going to add them just yet (the underframe needs to be painted, as well as the overall model) I started prepping them by using dilute PVA and wetting the paper they're printed on, to create a canvas affect. Unfortunately that caused the printing to go all splodgy, which is unprototypical. Apparently.

So now for Plan B, which is to create decals and apply them to the sides of the wagon...
Posted by Lewis Holden at 8:35 PM No comments:

I'm going to build a woodchip silo for my sawmill scene. Here's one I spotted in an article in the Otago Daily Times (unfortunately about a sawmill closing down).
Posted by Lewis Holden at 8:46 AM No comments:

I've now wired up all the turnouts for the intermediate station, Pukerua. Next task will be the track for the new depot area.
Posted by Lewis Holden at 9:20 PM No comments:

This weekend I started the long delayed task of wiring up the PECO point motors I've installed on the majority of the turnouts on the layout, and creating control panels for them.

I've created a separate bus (i.e. two wires underneath the baseboard) to power all the non-DCC electronics, basically the turn-out motors. The motors are switched using DPDT switches, which I've installed on control panels like this one below.
As a result of using DPDT switches where the switch defaults to off, and you can push the lever momentarily onto the on position - ideal for controlling points motors. I've removed the two PECO points switches I had previously dangling dangerously underneath the layout.

They're free to a good home, just contact me (nothing wrong with them - they're just surplus to requirements). Basically they require a large hole to be cut in the control panels which is problematic. PECO does make a special plastic stand for the switches but that's an additional expense I can't really justify.
Posted by Lewis Holden at 9:29 PM No comments: