Some of you might've heard that we are soon to lose the Kensey 1:64 scale sleepers we've been using on our layouts to make unsatisfactory HO scale track look... umm satisfactory for New Zealand conditions.

Fear not, for I have a solution. Well I think I do: 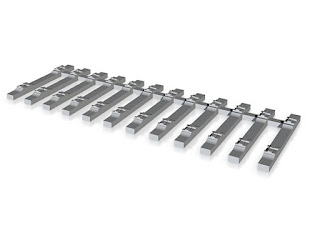 Using my limited 3D skills and a trusty camera, I set off to Penrose railway station (the closest one to my house) to measure up some sleepers fresh from the factory that had been handily stored right next to the footpath. If I was a better CAD designer I could've made the whole Pandrol clip thing (you can actually download designs of their clips from their website, I think to use that might be copyright violation of some sort...).

And after much mucking around on SketchUp and MeshLab, here's the finished product. It's designed for Code 100 rail (the track cradles will be too small for Code 83). I've ordered a set to see how they turn out. You can get them here.
Posted by Lewis Holden at 9:24 PM No comments:

Tilting at windmills I

ERTL make a "Western Ranch Set" in 1:64 scale, so you can either create scenes with your 1:64 scale John Deere tractors or rip the thing apart and kit bash the hell out of it if you're me. I picked up the set from the Model Barn just out of Thames thanks to a trip over new years to Tairua (Coramandel) and an understanding wife.

The set includes a barn, numerous figures, animals, farming paraphernalia, and of course a windmill. I liked the look of this one as it would set the scene nicely in any New Zealand rural setting, gently pumping water from a creek for use on the farm. Or something like that.

Being a kit, rather than a scale model, it was easy to put together:
Assembled it looks a bit like the NZR type windmills - see the Guild's structure planset #28. The blades are about right size for the scale but the fin is just wrong - it's far too small and being rigid won't move the blades in the direction of the wind. It'll have to go.

I'll also add in a ladder up to the top platform, and piping up to the pump at the top of the tower.

Since I'm going to make modifications to the windmill, I thought I might as well mechanise it too. At the moment the blades spin on their own axis, but that's not really the look I'm after. 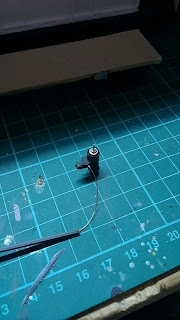 This micro-motor came out of one of those $20 remote control helicopters, I think from GrabOne a few years ago. Unfortunately I let my nephew play with it, who duly smashed the rotor blades up, grounding the chopper for good. So I disassembled it and left it in bits for a while, and took out the motor for this project. With a bit of testing it appears to run on 9v, but I'll probably cut that down with a resistor so the windmill's blades don't become an unrealistic fan hurtling around.

So, first task was to add the motor. Here's the top casting which the blades connect to: 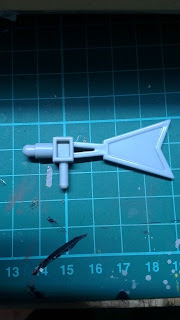 Luckily, it's just the right size to fit the motor in:

I cut off the little knobby bit the blades sat on, andd drilled through the plastic and made a large enough hole for the motor to sit in: 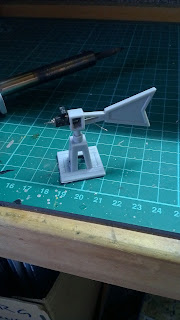 Nothing ever goes smoothly, and it turns out the motor has a few too many appendages on one side to fit just right, despite the hole being the correct size. So out with the needle files it was... and after much filing, the motor finally slid snugly into the unit.

Now for the blades. I drilled a very fine hole into the centre of the blades, which the motor's drive shaft will connect to:

The next step will be adding wires to either side of the tower to supply the low-voltage to the motor. More next time...
Posted by Lewis Holden at 11:41 PM No comments:

Created my first 3D model - a pallet in 1:64 scale.
My next project is 1:64 concrete sleepers. I've managed to get the dimensions.
Posted by Lewis Holden at 9:14 PM No comments: