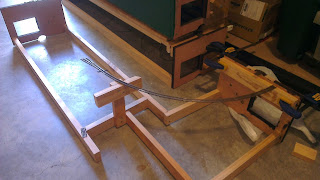 Another quick progress post to show I'm still alive... managed to get some time this afternoon to start working on this. It's the first of four corner modules.

Behind it is the traverser module and the single-track bridge module (the first I built). Both have single MMW end plates, while the corner modules have one and two track end plates.
Posted by Lewis Holden at 10:26 PM No comments:

Darryl Bond over at Motorised Dandruff has built a pair of these containers, which NZ Railways Rolling Stock states were first introduced in 1972. They're similar to Peter Bryant's Bulk plaster containers. They were later put onto UK container wagons and classified UKP:

However the bulk flour containers were significantly different in design...
Here they are unloading at Ngauranga from an old Rails magazine:
Here's a plan I found in the "Rolling Stock Operational Wagons" book:
And of course... in NZ Rail colours:


So I've whipped this up:

Just waiting for it to be ready for sale...

UPDATE: now available for sale - US$25 for normal detail plastic and $35 for FUD.
Posted by Lewis Holden at 11:22 PM No comments:

One of those oddities of the 1990s were locomotives DC 4346 and DF 6133. Both were painted in a one-off livery for one of NZ Rail's biggest customers, Tasman Forestry Ltd (part of Fletcher Challenge, remember them?). Apparently this was a thing NZ Rail tried to convince more of its big customers to do. Sadly the DC and DF were the only two to receive the livery and traveled all around the countryside, not just on Tasman related log or paper pulp trains. Tasman itself no longer exists post break-up of Fletcher Challenge and DC 4346 was repainted into Tranz Rail blue (boo!) and then KiwiRail red/grey. DF 6133 was reborn as DFT 7307, now DFB 7307, and in KiwiRail red/grey also.

I recently purchased one of Peter Bryant's DC class shells. Since I've always wanted a DC and DF in Tasman colours combo, I thought I might as well start with DC 4356. The 3D model itself is pretty good, in this version Peter's removed the handrails and there's an option for the different style of rear lights (i.e. shroud or no shroud). The model has the tell-tale pocket on its cab sides for ye olde tablet exchanger which the DC class originally had - luckily DC 4346 retained this pocket, even though the tablet exchange equipment was removed. After the usual clean up with acetone (i.e. nail polish remover) and dishwashing detergent, it was off to the paint booth for a primer spray:


I've got some decals from Trackgang Products. Russell has previously built models of DC 4346 and DF 6133:

Main colour is Humbrol # 10 Gloss (chocolate) brown. Gotta get me some of that. Next I need to acquire a chassis (I brought a SD7 online... but it turned out to be in HO scale!).

For lights I've decided to experiment with sort of fibre optics. I was looking for those fibre optic Christmas trees you can get if you can't be bothered putting up lights every year, but I found these instead:

Apparently there is some fashion trend which involves putting these in your hair. Not knowing anything about fashion, I can't verify this. But they do look idea for making those tiny lights you can't fit into a cab...

The instructions were clear not to use them improperly. So I pulled it apart and took out the strands.

Two strands were then pushed through the reversing light holes in the short hood of the loco. They look brighter in real life...

These are only single strands remember. The main thing for me is that I could use this technique in future to make ditch lights.

Next the chassis. I purchased an Atlas SD-7 from Ebay: 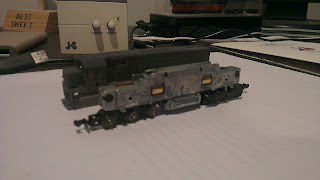 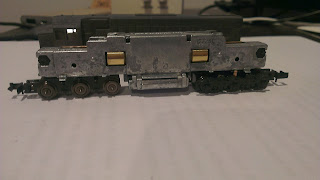 Not a huge amount of modification required, the fuel tank being the main problem. There's a thin copper plate that goes on the bogies to connect to the chassis which I'll remove and solder wires directly to the bogie contacts (to prevent and shorts thanks to DCC).

There seems to be a 5mm gap between the top of the chassis and the shell - will make use of this to stow the decoder and lights.