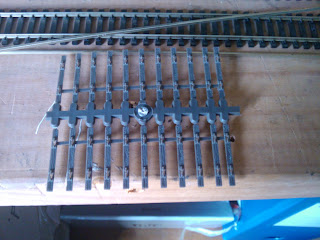 Here's what they look like straight out of the packet. You've got to remove the casting thingee in the middle first. 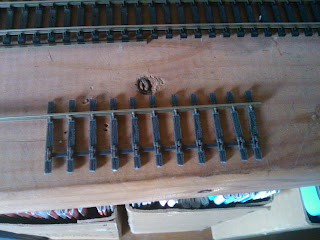 ...then start to feed one of the rails through the first set. 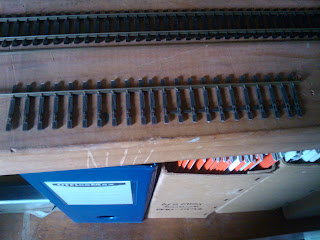 It's a good idea to alternate the side the sleeper supports go on, as above. 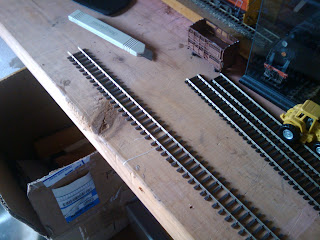 The whole process takes about half an hour for a 1m section of flex track. 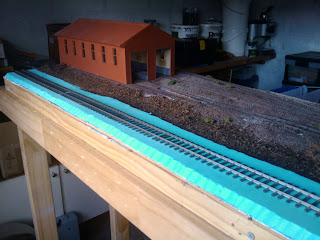 Voila! With the PVA dried and the books removed, here's a quick test run of the NZR track in situ. I'll paint over the camping mat first with a brown acrylic, just so none of that unnatural blue shows up through the ballast and ground cover.
Ok, off to make another section of flex track. It's a pretty satisfying job to see all those correctly spaced (well mostly) sleepers in place ready to go.

Next post I'll go into making the track look rusty, and ballasting the track to mainline standards.
Posted by Lewis Holden at 6:59 PM No comments:

Ok, I realise this blog has had very little in the way of actual modelling from myself. However now I've finally got most of the garage unpacked, I've started dreaming of what it could look like. Enter modifications to the first (and so far only) module I've built, courtesy of SCARM:
Basically all I've done is added a track at the back of the module, which will eventually form the main line. The depot trackage remains the same, apart from the coal siding back-shunt which has been truncated. Here's an idea of what it looked like prior to the new track being added:
As you can see, the trusty Thomas the Tank Engine test locomotive is on the current depot tracks. There was 10cm at the back the module to add in the new mainline, so I removed a strip of the ground cover and some of the camping mat. PECO code-100 flex track in place at the moment doesn't look right, but more on that in a minute.

First, I added in a new strip of camping mat. This idea comes from an article Peter Ross published in the Journal a while back. It's a cheaper alternative to cork, which I've used in the past, and more pliable. The only downside is that it forms these awful beads, but this can be overcome by using a sharp Stanley knife. The camping mat I've got is about 1cm thick. I bought it at the Warehouse a few years ago for next to nothing.

So, I cut a strip of camping mat and put it in place, then applied PVA liberally onto the baseboard. I then put assorted books to weigh it down while it dried (yes, I mainly have NZR books in the garage):
The PVA takes a few hours to dry, so in the meantime I set about making some NZR track using Online plastic NZR sleepers. Here's how.

First, take your bog standard flex track. I use PECO code 100, mainly because I find code 83 twists too easily.

We need to remove their out-of-scale and badly coloured sleepers. Second, I run my Stanley knife down one side of the ties to cut them off the rail.
Third, remove the rail that you've cut the ties off, then break the sleepers off the opposite side: 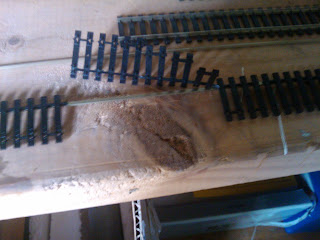 Now you've got two sections of nice Code 100 rail to feed through your Online NZR sleepers.

For some reason Blogger restricts posts to 7 images, so here's Part II.
Posted by Lewis Holden at 6:48 PM No comments:

Came across this great website on the New Zealand Locomotives Yahoo Group. Will add it to the links to your right.
Posted by Lewis Holden at 10:14 AM No comments: