I've always wanted one of those Speights containers pictured on Motorised Dandruff:

So I knocked this up:

As you can see I've designed this so that the tank can be painted separately (so I can add the Speights decal basically) and the ends added separately. I've ordered one and put the design up on Shapeways.
Posted by Lewis Holden at 8:04 PM No comments:

A bit more progress today. I've added two MDF strips at either end of the module, and purchased a PCB board. It's fibreglass though, I'm a little worried about cutting it as I've read that it gives off nasty dust...

Next steps are cutting the PCB and soldering the track ends to it, and adding the flex track. Then to wire the thing up...
Posted by Lewis Holden at 5:22 PM No comments:

Have made good progress on my traverser module this weekend. Unfortunately there's a bit of a bow in the plywood so the track isn't 100% level. Still to be added is the fixed pieces of MDF at either end and the bolt barrel locks - and of course the tracks! I've worked out I should be able to have eight tracks on this module, at 1.2m long that's a decent length of train in NZ120.
Next steps are to add the MDF, solder the end rails, attach the plywood board to the sliders (as you can see I've got Quikgrips on it at the moment), add the barrel bolts at either end and the piece of wood they slide in to.
Posted by Lewis Holden at 12:52 PM No comments:

More Modules in the Works

...or, a lame attempt at working MMW into a title.

After another bout of selling stuff off, I've finally got around to getting the NZ120 house from Shapeways on my first module:

As you can see I've carved out a flat area from the polystyrene. I'm going to wire the house with lighting so drilled through the MDF board. 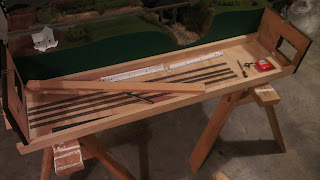 The idea I'm working on is that the two drawer sliders (the white things in the middle) will be attached to two cross-beams, which will have the opposite side of the slider on them to the storage track plate. This will allow the storage tracks to slide backwards and forwards so that any one could be the main through track. A barrel bolt at either end will hold the traverser in place.

Kind of like this one.
Posted by Lewis Holden at 10:23 PM No comments: