I'm planning on having a fertiliser siding in the corner of the layout, where CF wagons (I've currently got one kit on the go) are unloaded and their contents transferred to trucks for distribution on local farms.

Looking around, there aren't many great examples of fert unloading sidings in this country that are out in the open... except for the Ballance Agri-Nutrients siding in Washdyke, north of Timaru, on the former Fairlie Branch. It features in the December 2002 edition of the NZ Model Railway Journal with some pretty good shots of the unloading pit (it's basically a large concrete slab with a screen in the middle). Wagons out of the Ballance works at Awarua (south of Invercargill) are hauled over the screen as their contents are disgorged into the pit, where the fertiliser is picked up by a giant conveyor which feeds into the storage area:

Unfortunately the view on Google Earth isn't as close as I'd like, but here's the closest you can get to the unloading pit:

The great thing about Google maps is you can use the measurement tool to get the basic measurements: 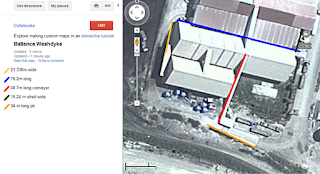 I'll work on a plan based on how much space there is on the baseboard, but the building should be pretty easy to put together - just lots of fine corrugated cardboard, probably built around a balsa and card structure.
Posted by Lewis Holden at 7:05 PM No comments:

The weather's been pretty foul today, so I took to ripping up and re-laying track on the depot module. I've been meaning to do this for a while, replacing the medium-radius PECO turnouts with large-radius turnouts.

I'm going to take out the silly back-shunt I put in as well.
Posted by Lewis Holden at 8:29 PM No comments: