ZBPs were a class of curtain-side "swap body" wagons built on UK container wagons by NZRL from May 1991. A total of 22 were introduced into service.
I've wanted to make a model of one for a while, since Darryl Palmer of Station Road makes curtain sides. December 1999 edition of the NZ Model Railway Journal has the plans in both 1:64 and 1:120 scale.

Just add UK wagon and curtain sides plus some styrene for the roof and viola! Well kind of. More later once it arrives from Shapeways.

New Zealand Railways Rolling Stock has more details on the wagons themselves.
Posted by Lewis Holden at 10:36 PM 4 comments:

As I mentioned in a previous post, my layout's gone digital with the installation of a Digitrax system. The first logo I DCC'd was my DX, and because I didn't screw that one up I decided I'd go for a more complex project.. my DFT, 7008.

I purchased 7008 from someone else and didn't know much about how it was wired.

But first, the decoder:
And now, the victim subject:


As you can see it's a typical DC set-up - a single contact wire plus a positive / negative connection to the directional lighting circuit, with 4x bulbs (2 for the front and 2 at the back).

First up, I removed the decoder harness from the packet, and quickly took the funny pin thing off: 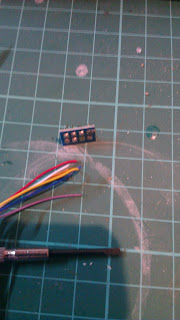 With that done, it was time to wire in the harness:

This covers the basic setup of the decoder - motor connection. I programmed the decoder on my test track (just in shot below) hooked up to the Digitrax booster. The decoder takes 4 digits, so naturally I programmed it as 7008, with 08 being the two-digit code (I've got a DA numbered 1400, will probably have to use its TMS number...).

Next was the light. Originally I attempted to use the normal filament-type bulbs that were already in the loco. I managed to burn through all four of them, thanks to not using the correct resistor.

So instead, Grant Morrell suggested I buy LEDs, a much better idea. He suggested ledstuff.co.nz, an excellent service with great prices. I've ordered 2x lots of their 3mm white LEDs and 1x of the really small red ones (for reversing lights). The white ones were wired in parallel for the headlights, like this:

Next, it was off for a test run:

Also, the tunnel portal arrived:
It's a bit larger than I thought I'd measured, but once I ran a containerised UK through it it looked fine.

A package arrived today from Shapeways. It had three spurs of my concrete sleepers:

And they turned out ok! Gauge is fine and they now take Code 100 rails. More importantly, they actually look right and to scale. Success!

Now to find a way to make them more cheaply...
Posted by Lewis Holden at 10:11 PM No comments:

I'm sure the observant among you would've noticed there's a few tunnel portals on my layout. There's a lack of proper NZR tunnel portals available to modelers, so I decided to create my own using the modern day miracle magic of 3D printing.

First step was to find out what information's available. As it turns out, the NZMRG Journal December 1992 edition has a "plan page" on NZR tunnel profiles, to various plans. It appears there wasn't really a standard design for tunnel portals, just a series of plans for each tunnel. I photocopied the plan page and stuck it to some card, cutting out the outline of the profile for Plan 10-229, which seems to have been from a tunnel on the Midland line:

Then it was off to the layout to test the dimensions:

That all seemed to fit (although I realised the bottom of the portal needs to be slightly elevated otherwise larger wagons / locos will scrape it, mind you that is realistic...). As you can see the first attempt at making a 3D model (above) didn't come out so well, it seems a lot of the blocks weren't properly enclosed. So I re-cut the design and this is what I came up with: 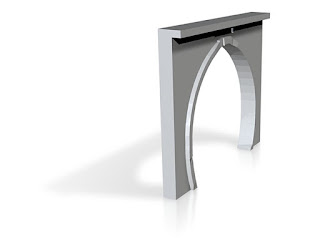 The edges of the portal are "cove", it'll be interesting to see how this comes out in the printing process.

Coincidentally this portal is now on my Shapeways store.

Posted by Lewis Holden at 8:16 PM No comments: 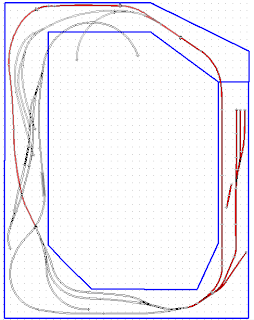 Track in red has been actually laid and glued down...
Posted by Lewis Holden at 1:14 AM No comments:

Email ThisBlogThis!Share to TwitterShare to FacebookShare to Pinterest
Labels: Layout

Not the TV, my layout. It's been a while in between drinks, thanks to the install of a new Digital Command Control (DCC) system. I've finally taken the plunge and installed the Digitrax Super Chief DCC system I bought a few months ago online. Initially I'd just hooked it up to my test track, but went all the way today and got the rest of my layout ready to go.

The first candidate for a decoder was DX 5483. I'll probably write more about the experience of programming it later.
Posted by Lewis Holden at 6:58 PM 2 comments: