Another project I've been meaning to get stuck in to for a while: 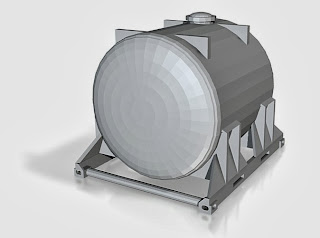 The plans for the LWD came from the March 2009 edition of the New Zealand Model Railway Journal. 25 of these LWD class 10ft bulk liquid containers were introduced by NZR in the late 1970s.
KiwiBonds has a great pic of two containers sitting on a UK class container wagon at Auckland in the 1990s:
The model itself is closer to the 1990s version than the 70s one. You just need to add in the ladders (too fine for 3D printing) and gangways/handrails.

Work on the corner module has continued: 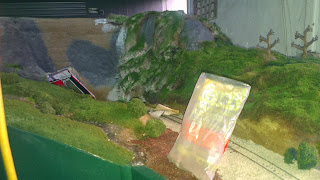 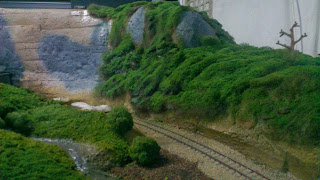 Posted by Lewis Holden at 6:42 PM No comments:

Some progress on this loco. Earlier this week a mate of mine cut the ends off the fuel tank on the Athearn chassis I acquired for the DXR. Here's the result:

As you can see the loco's in a primer grey, with about 90% of the handrails done - the only ones missing are the side ones behind the cab (as you can see from the pic). These will be added shortly, along with brake hoses, horns and stanchions for the rear handrail. After that it's off to the paint shop, the chassis will be re-painted black (it's currently silver) along with the bogies first, followed by the blue bits, yellow bits and finally the grey bits (i.e. the cab and roof).
Posted by Lewis Holden at 10:46 PM 1 comment:

Email ThisBlogThis!Share to TwitterShare to FacebookShare to Pinterest
Labels: Electronics

The main light blew in the garage man cave a few weeks back, so I decided to replace it with those fancy LED lighting strips you see at the likes of Jaycar. They're 12V DC powered so the hardest part was finding the appropriate power supply.

Luckily I had an hold PC power supply I stole from somewhere, which has outputs varying from 33V AC to 5V DC, and of course 12V DC. The unit itself didn't have a switch, so I took the cover off to figure what wires actually switched the unit on and off... turns out it was the purple and grey wires which went to an isolated part of the power supply's internal board. They were connected together and the fan started spinning... so far so good!

Next I removed the old light, and the cabling with it. My original plan was to connect the wires that went to the old light to the power supply (via a male and female 240V plug). However once I wired it all up the old circuit didn't want to work. Nevermind.

Meanwhile I added two lighting strips to the cross-beams in the garage. This is pretty easy as the strips have 3M adhesive strips on them. They come with plugs pre-soldered on, so adding a second set was pretty easy. As you can see they put out a lot of light, pretty good considering they use much less energy than traditional incandescent lights.

I'll add more of these strips as I go - they only cost about $25 a pop. I'll probably eventually remove the halogen set I installed at the end of the garage as a second light source and replace them with LED strips as well.
Posted by Lewis Holden at 5:52 PM 2 comments:

Email ThisBlogThis!Share to TwitterShare to FacebookShare to Pinterest
Labels: Electronics